The radical left has been beside themselves ever since Elon Musk first hinted he might buy Twitter.

Once he announced the purchase, they went totally nuts.

Now they’re tearing their hair out as Elon Musk says he will reverse this “immoral” Twitter ban.

It’s been a couple of weeks since billionaire Tesla owner Elon Musk announced he was buying Twitter.

And the left has lost their minds.

They can’t believe a fellow liberal like Musk would dare go against them by –gasp— daring to support free speech.

And make no mistake, Musk is no conservative, not by a long shot.

In fact, his company Tesla is one of the companies that just announced they will be funding employee’s out of state trips to kill their children in order for the company to avoid having to pay maternity leave.

And of course, Musk is all in on the Green New Deal disaster.

But none of that matters to the truly radical leftists, you must be all of the above AND in favor of silencing any dissenting voices, or you are the enemy to them.

So of course, Musk, otherwise a leftist they would admire, has become public enemy number one.

And now, he just broke them.

The billionaire Tesla and SpaceX owner made the comment during an appearance at FT Live’s “Future of the Car” conference.

Twitter accepted Musk’s offer to purchase the company back on April 25, but Musk now says the deal could take another two to three months to finalize.

In the meantime, the African-American billionaire is wasting no time causing the radical leftists anxiety.

Musk said, “Permanent bans should be extremely rare and really reserved for accounts that are bots, or scam, spam accounts… I do think it was not correct to ban Donald Trump. I think that was a mistake, because it alienated a large part of the country and did not ultimately result in Donald Trump not having a voice.”

According to their reaction, Musk had just declared war on all that was good and pure in the world.

Musk added that former Twitter CEO Jack Dorsey agrees with him that Trump should not have been banned.  Of course, the question is, then why didn’t Dorsey reverse the ban himself?

While the leftists cry and scream about Musk’s impending purchase of Twitter and the “evils” of freedom, Trump has said he won’t be returning to Twitter anyway.

“I am not going on Twitter, I am going to stay on TRUTH,” Trump told Fox News. “I hope Elon buys Twitter because he’ll make improvements to it, and he is a good man, but I am going to be staying on TRUTH.”

It is still early yet, and we will see just what changes Elon Musk actually does at Twitter, and whether or not he reverses Trump’s ban, and the many other bans on conservative voices imposed by radical Twitter censors.

And we will see if Trump or any of the other banned conservatives come back.

One thing you can say about Elon Musk is he’s not afraid to speak his mind.

And that drives the Left absolutely nuts.

Now Elon Musk is calling out the media for covering up this detail from the Ghislaine Maxwell trial.

Elon Musk has really been riling things up over the last few months.

Everyone from The Washington Post to Bill Gates has attacked him and Democrats in Congress are even contemplating legislation to punish him.

But no one seemed prepared for Musk’s latest Tweets.

Musk caused a major sensation on Twitter by asking an intriguing question about Jeffrey Epstein, Ghislaine Maxwell, the media, and the Department of Justice.

One of the top-trending topics on Twitter became “Jeffrey Epstein” after Musk tweeted a question about the deceased convicted pedophile.

Musk tweeted, “Only thing more remarkable than DOJ not leaking the list is that no one in the media cares. Doesn’t that seem odd?”

The Twitter trolls came out in force, but Musk was ready for them.

When one Twitter user tried to blast Musk by posting a picture of Ghislaine Maxwell standing behind him at a formal event, Musk fired back.

“Ah yes, Maxwell photobombing me at a @VanityFair Oscars party – you should [ask] them why they invited her.”

“The same people who push this photo say nothing about prominent people who actually went to his island a dozen times,” Musk said “Also very strange …”

Not surprisingly, there was no good response to that.

Former President Clinton, we found out, took at least 26 trips aboard Epstein’s “Lolita Express” private jet, according to records obtained by Fox News.

Yet most major news outlets, and clearly Joe Biden’s DOJ, continue to cover this up.

Those who have tried to bring it to light have been silenced.

This has not been lost on Musk who last month tweeted, “If I die under mysterious circumstances, it’s been nice knowin ya.”

Epstein, of course, died under very mysterious circumstances in his prison cell awaiting trial for sex trafficking minors. His death was shockingly ruled a suicide.

Ghislaine Maxwell was convicted of recruiting and grooming teenage girls for sexual encounters with Epstein and is to be sentenced on June 28.

Elon Musk has gotten under the skin of the Left in a profound way.

His gambit to buy Twitter has triggered a shocking backlash from the establishment.

The media unleashed another hit piece on Musk and it was unbelievably cringeworthy.

Under normal circumstances, Musk would be a darling of the Left.

In fact he used to be.

He was once hailed as a Big Tech disruptor, he had a cameo in the blockbuster film Iron Man 2, and he created a successful electric car company.

Yet the Left despises Musk, who is a major donor to the ACLU.

They hate Musk because he believes in the ACLU’s once-cherished belief in free speech, and the Left do not.

The Democratic establishment only believes in power, and they must control the narrative in order to maintain it.

That’s why the Left are so furious at Musk for attempting to acquire Twitter; it is one of the establishment’s most powerful propaganda tools.

Numerous so-called mainstream media outlets have taken shots at Musk, and now the Associated Press is throwing its hat in the ring.

The paper wrote a piece with the description: “Elon Musk boasts that he’s acquiring Twitter to defend freedom of speech. But he has long used the platform to attack those who disagree with him.”

Elon Musk boasts that he’s acquiring Twitter to defend freedom of speech. But he has long used the platform to attack those who disagree with him.https://t.co/qhgm1zQOkz

The entire point of free speech is that everyone gets to speak, including Musk and his critics.

In fact, Musk invited his critics to remain on the platform and engage him where they disagreed.

The Left have used circuitous logic to explain why they should be allowed to censor people.

Years ago, censorship was necessary to combat “hate.”

Then people needed to be banned for spreading “election disinformation” about 2020.

Now, the Left ping-pong back and forth between whichever flimsy excuse meets their current need.

In addition to the AP, The New York Times released a series of hit pieces against Musk.

Their bizarre critique of Musk is that he was in favor of free speech because he grew up privileged in apartheid South Africa where free speech was not allowed.

Somehow, the Left tried to turn that into a character flaw of Musk’s.

Elon Musk has shaken up the entire Left.

So-called journalists have absolutely lost their minds over the idea that Musk refuses to censor speech on Twitter.

And now Musk is onto one giant fraud being committed by The New York Times.

Elon Musk followed through on his plan to buy Twitter and take it private.

Musk explained that his $44 billion investment in Twitter wasn’t about the money; it was about re-enshrining free speech as a bedrock value now that the public square has largely moved onto Twitter.

It’s quite telling that liberals are furious at the concept of free speech.

But they could also be exasperated by the fact that Musk now has the evidence of whether or not Twitter was manipulating code to favor the Left.

And libertarian commentator Dave Rubin pointed out that The New York Times has 53 million followers, but hardly gets any engagement on its tweets.

Musk saw Rubin’s tweet and commented, “Yeah, I noticed that too. Pretty weird.”

Yeah, I noticed that too. Pretty weird.

Rubin proved his point by posting a banana emoji on top of a picture of Estelle Getty from The Golden Girls, which received tens of thousands of likes and retweets. 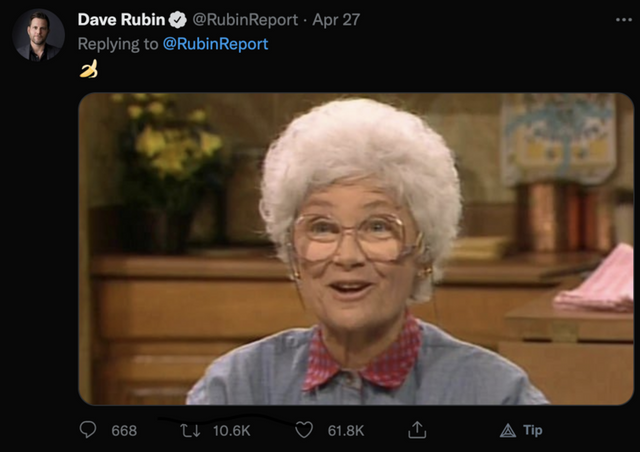 The Times is one of the accounts promoted to people when they first sign up on the platform, but one would think that an account with 53 million followers could get more engagement, even if the majority of the millions follow the account passively.

The follower count could potentially be inflated to give The Times the appearance of widespread popularity and authority.

But that’s probably not the case considering Mexican telecom billionaire Carlos Slim had to bail out the paper a few years back.

The “paper of record” does not have the same prestige it once had.

That didn’t stop The Times from commissioning several hit pieces against Musk.

NYT now has THREE hyperventilating Op-Eds about Musk and the end of the world pic.twitter.com/oEg6TLdh7r

Musk hasn’t even done a full audit of the company yet, but his purchase already seems to have made a significant impact on the platform.

Many prominent conservatives have noted that their follower count mysteriously increased by several thousands, and they’re seeing more right-wingers in their news feed.

One of the conservatives to make this point was radio host and gun rights advocate Dana Loesch, who tweeted, “Noticing an increase in followers and engagement after losing huge chunks (or static follower count for weeks on end) for the past few years. Also seeing tweets from people whose accounts I never see and am not having to refollow other conservatives repeatedly.”

Noticing an increase in followers and engagement after losing huge chunks (or static follower count for weeks on end) for the past few years. Also seeing tweets from people I whose accounts I never see and am not having to refollow other conservatives repeatedly.

News of Musk buying the company might have triggered the digital version of paper-shredding in the middle of the night before the malfeasance can be detected.

Regardless, it’s quite clear that the establishment has lost its control of the narrative.