CNN is the largest purveyor of fake news in America.

They work overtime to defend and protect their Democrat counterparts and serve as a cable news extension of the Democrat Party.

And what this CNN host just said defending Ilhan Omar’s 9/11 comments will make your head explode.

U.S. Representative Ilhan Omar was catapulted to the national stage after she became one of the first two Muslim women elected to Congress.

But in the few short months she’s been in office, she’s been plagued by controversy.

Most recently, she described the 9/11 hijackers who murdered nearly 3,000 Americans as just “some people” who “did something.”

And of course, Democrats are now blaming conservatives for spewing hate and inciting violence against Omar.

But CNN – doing what they do – deployed their cavalry to rush to Omar’s defense.

CNN host Brian Stelter devoted a 3-minute monologue pushing the narrative that “this controversy was created,” not by Omar, but by the big bad “right wing rage machine.”

Omar’s words aren’t to blame, but instead the outrage by conservatives that an anti-Semitic Congresswoman is downplaying the attack that slaughtered thousands of Americans.

"Controversies" don't just happen — they are created. Here's how the right-wing rage machine generated a week's worth of headlines about @IlhanMN pic.twitter.com/Ba6Oli3Fqo

The fact of the matter is no one is to blame but Omar.

Even President Trump issued a scathing video on Twitter attacking the freshman Congresswoman, declaring, “We will never forget!”

WE WILL NEVER FORGET! pic.twitter.com/VxrGFRFeJM

Of course, every Democrat and all the fake news outlets like CNN are working overtime to call Trump and the “right wing rage machine” divisive and racist.

They only call them divisive and racist because Trump’s attacks are effective.

And Americans are waking up to just how bad the Democrats are becoming.

Trump says Omar is “out of control” and “somebody that doesn’t really understand life, real life.”

It’s ironic seeing Stelter and CNN downplaying this recent Omar scandal as some “right wing” manufactured controversy considering they’ve literally spent days talking about Trump having two scoops of ice cream when he gives everybody else one.

In fact, they called that a “top line” from a Time interview.

CNN is the number one manufacturer of fake news.

It looks like they will continue to be through the 2020 election as they attempt to knock Trump out of office.

We will keep you up-to-date on any new developments in this ongoing story.

Robert Mueller was at a loss for words after this confrontation

Joe Biden has been a complete failure as President.

But the Fake News Media continues to shill for him.

And this talking head claims Americans should celebrate Joe Biden’s “achievements” for the most ridiculous reason ever.

On a segment of CNN’s At This Hour, White House correspondent John Harwood claimed Americans should “stop and recognize the breadth of” President Joe Biden’s supposed “achievements.”

Host Kate Bolduan began the segment by praising the Democrat-controlled Senate’s passage of the so-called “Inflation Reduction Act,” saying it “adds to a really sudden reversal of fortune for President Biden, who can now celebrate several legacy-defining victories in his first two years in office.”

This grossly misnamed bill, which Senate Democrats rammed through without a single Republican vote, is a socialist tax-and-spend boondoggle that will do nothing to ease the average American’s pain caused by Bidenflation.

It will, however, raise taxes on every American and ramp up IRS enforcement to harass Americans who own a small business, work as an independent contractor, have a side hustle to make extra cash, or simply use apps like ApplePay, Venmo, and CashApp.

While touting the so-called “Inflation Reduction Act,” Harwood even let it slip that the bill “won’t reduce inflation much.”

He then proceeded to list off what he considers President Biden’s “achievements,” a list which consisted of increasing government spending by several trillion dollars – which caused inflation in the first place – and gun control.

Harwood and Bolduan even claimed that they believe these recent “accomplishments” will help Democrats in the Midterm elections, though Harwood lowered expectations by claiming that it would be an achievement if Democrats only lose control of the House.

Of course, the Fake News Media doesn’t want to talk about what President Biden has actually “achieved.”

Or his botched Afghanistan withdrawal, which left American civilians, military personnel, and billions of dollars’ worth of weapons and resources behind for the Taliban to scoop up.

Or the “achievement” that is the humanitarian crisis at the southern border, where millions of illegal aliens have invaded border states and ravished communities along the way.

He is also adding 87,000 new IRS agents, which is more than four times the number of Border Patrol agents that we currently have.

Of course, Joe Biden and Democrats claim that all these new IRS agents are needed to go after billionaire tax cheats, but we all know they will be used to harass hard-working Americans and small business owners.

He has “achieved” the first recession in over a decade, even though hack left-wing “economists” and the Fake News Media have tried to change the definition of “recession.”

Of course, one of Joe Biden’s biggest “achievements” is being the least popular President in American history, with his approval rating hovering just above 30%.

Let’s see what Americans really think of all these “achievements” on November 8.

Democrats have allowed the radical Left to run wild.

The radicals are getting more and more extreme.

And the media’s reaction to this shocking threat against Brett Kavanaugh will leave you red with rage.

Democrats got what they wanted after a Supreme Court leak of a draft opinion from Justice Samuel Alito.

The draft opinion signaled the overturning of Roe V. Wade, and Democrats predictably melted down.

They wanted chaos in the streets and leftist mobs protesting outside the homes of Supreme Court justices, which is a federal crime.

But the Democrats’ calls for protesting outside the homes of conservative justices just took a terrifying turn.

A deranged leftist drove from California to Maryland with the explicit intent of assassinating Brett Kavanaugh.

The would-be assassin, armed with a knife and a gun, realized he would not be able to bypass security, and called the police on himself.

Perhaps, the most disturbing aspect of the story is the Democrat Media Complex’s complete lack of interest in the story.

For example, the story is already off the front page of The New York Times.

If a deranged right-winger got arrested near the home of Justice Sonia Sotomayor, there would be press coverage from wall to wall.

Worse yet, few on the Left are telling the radicals to tone down the rhetoric and illegal protesting.

In fact, a pro-abortion extremist group called Ruth Sent Us threatened Kavanaugh’s wife and their daughters. 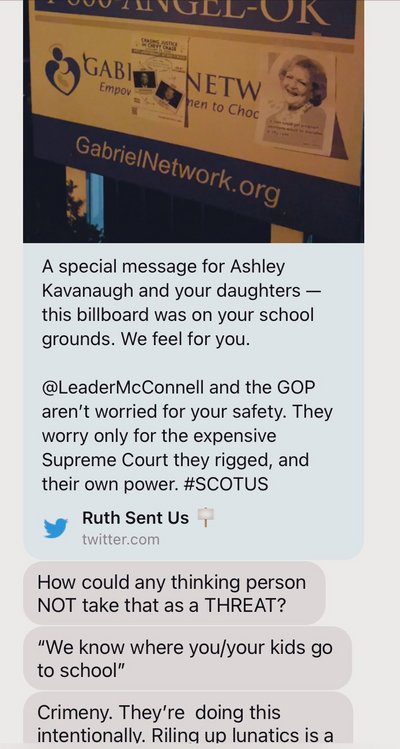 Not only that, but the lunatic found Kavanaugh’s house thanks to a map provided by Ruth Sent Us.

Reporter Mollie Hemingway explained, “Pro-abortion group that posts directions to Kavanaugh’s home — man arrested today said he used online map to find it — also targeting his young daughters’ school. This escalation and threat against the children must be stopped. Horrific.”

The same Democrats that were encouraging people to show up at Kavanaugh’s house have conveniently gone silent.

These are also the same people that call Donald Trump an “insurrectionist” for telling his supporters to “peacefully and patriotically” protest on January 6th.

The Left are encouraging their shock troops to illegally protest outside the homes of Supreme Court justices.

In 2020, Chuck Schumer said, “Inside the walls of this court, the Supreme Court is hearing arguments, as you know, for the first major abortion rights cases since Justice Kavanaugh and Justice Gorsuch came to the bench…I want to tell you, Gorsuch, I want to tell you, Kavanaugh, you have released the whirlwind and you will pay the price. You won’t know what hit you if you go forward with these awful decisions.”

Maybe this is what Schumer was talking about.

It’s one of the only ways they can sell their radical ideas.

Now the word police at the Associated Press are shockingly censoring one word.

The horrific mass shooting in Buffalo has managed to knock abortion out of the headlines.

The Fake News Media is going all-in on the white supremacist attack in order to pin the responsibility on Republicans.

It’s an absurd argument, but the Democrats are shameless.

In fact, they’re even manipulating language.

The Associated Press Stylebook does not want the killer’s 180-page ramblings to be classified as a manifesto.

The AP wrote on Twitter, “We don’t use the term manifesto in reference to a racist diatribe. It glorifies racist hatred. Other terms such as diatribe, screed or writings can work instead.”

We don't use the term manifesto in reference to a racist diatribe. It glorifies racist hatred. Other terms such as diatribe, screed or writings can work instead.

Sommers wrote, “You are confused. Hitler’s Mein Kampf & rantings of the Unabomber are routinely referred to as “manifestos.” For example: Encyclopedia  Britannica. “Mein Kampf, (German: “My Struggle”) political manifesto written by Adolf Hitler.”

You are confused. Hitler’s Mein Kampf & rantings of the Unabomber are routinely referred to as “manifestos.” For example: Encyclopedia Britannica. “Mein Kampf, (German: “My Struggle”) political manifesto written by Adolf Hitler. https://t.co/Y036sCNnpj.

Perhaps the Left don’t want to dirty up the word manifesto because of their fondness for Karl Marx’s “Communist Manifesto.”

Marx’s evil ideas have festered for nearly 200 years, eating away at society and poisoning a new generation of impressionable minds.

In fact, the Buffalo shooter wrote in his manifesto that he used to be a communist, but currently identifies as “mild-moderate authoritarian left.”

The shooter also wore the black sun insignia, a symbol sometimes used by the neo-Nazi Azov Battalion of Ukraine.

He also said that one of his main inspirations was the Christchurch shooter in New Zealand, who had trained with Azov prior to committing his despicable massacre at a mosque.

Both the Buffalo shooter and the Christchurch shooter claimed to be radical environmentalists.

All of these facts are inconvenient for the Left because they tacitly support the Azov Battalion in Ukraine, and they’re trying to blame the shooting on Fox News, even though he explicitly said in the manifesto that he hated Fox.

Democrats are trying to control the narrative, and that starts with controlling language.

Unfortunately for them, they no longer have a monopoly on the dissemination of information.