Joe Biden is losing it.

His only saving grace is a corporate-controlled press hellbent on protecting him.

And these cable news hosts got torn to shreds after Biden shockingly attacked one reporter.

The so-called “mainstream” media promised that Joe Biden would bring back decorum to the White House.

He was supposed to be the antidote to Donald Trump’s “mean Tweets.”

“The Grownups are back in charge” was the party line for Biden’s election victory.

But the American people were sold a bill of goods.

Biden has broken all of his campaign promises, which is why his approval ratings are in the low 30s according to some polls.

Now Biden is “attacking the free press,” which is what was said when Trump pushed back on reporters or called them “fake news.”

Biden referred to Fox News White House reporter Peter Doocy as a “stupid son of a bitch” after he asked persistent questions about inflation.

Members of the press either reported on the story matter-of-factly without any finger-wagging editorializing, or they were outright giddy.

But CNN’s Brian Stelter had a different tone when Biden got caught on the hot mic slamming Doocy than he did when President Trump was in office. 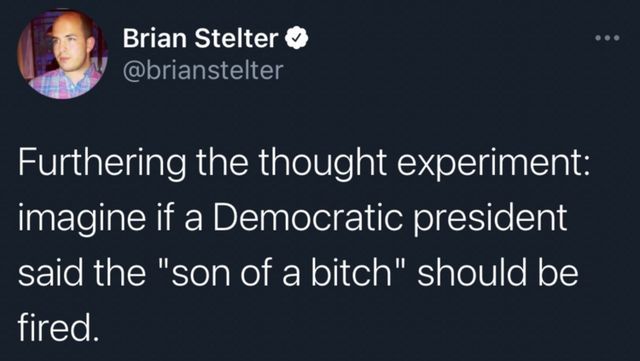 Chris Hayes of MSNBC also switched from Solemn Journalism Man to Giggly High School Mean Girl when the Fox News reporter was the one getting insulted by the President.

Hayes had absolutely no good response when he got called out. 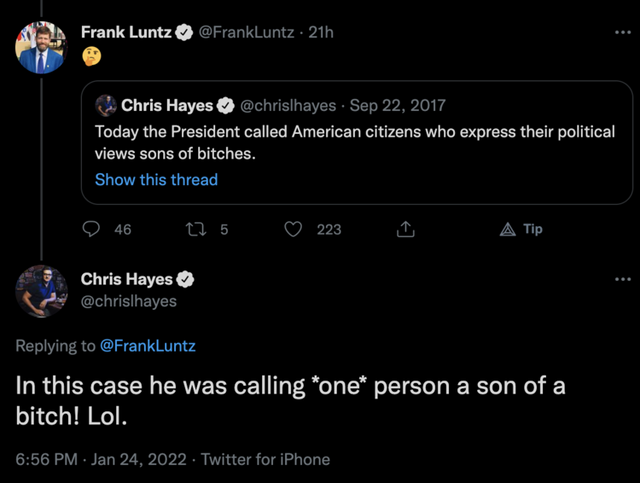 Biden previously said that he would fire anyone who did not treat the press with respect.

Perhaps he should fire himself.

Joe Biden in January of 2021: "But I'm not joking when I say this, if you are ever working with me and I hear you treat another colleague with disrespect, talk down to someone, I promise you I will fire you on the spot." pic.twitter.com/XXH5GoRORn

Based on his poll numbers, the American people would probably appreciate it.

Joe Biden ended his presidency with one humiliating press conference

The Fake News Media has been running cover for Joe Biden since before he even set foot in the White House.

So-called “journalists” have turned a blind eye to countless lies Biden has told over the year and a half.

But Biden’s tall tales are getting so bad even CNN has had enough.

During the 1980s, conservatives in the Washington, D.C. area would drive around with bumper stickers on their cars that said “I don’t Believe the Washington Post.”

Now of course, most of what we consider the “mainstream” or corporate media is nothing more than the official public relations wing of the radical Left, or the Democrat Party spin machine.

They crank out articles and news pieces that fit the Left’s narrative.

But every once in a while, even the democrats can push it too far for their friends in the Fake News Media.

That’s what happened recently when Joe Biden’s White House tweeted out something that even CNN and the Washington Post had to challenge.

“When President Biden took office, millions were unemployed and there was no vaccine available. In the last 15 months, the economy has created 8.3M jobs and the unemployment rate stands at 3.6% — the fastest decline in unemployment to start a President’s term ever recorded.”

Didn’t a picture of President Joe Biden receiving his first COVID-19 vaccine dose get tweeted out on Dec. 21, 2020?

“Today, I received the COVID-19 vaccine. To the scientists and researchers who worked tirelessly to make this possible — thank you. We owe you an awful lot. And to the American people — know there is nothing to worry about. When the vaccine is available, I urge you to take it.”

According to the “Our World in Data” website, there were some 19 million Americans who had received at least one dose of the COVID-19 vaccine by Biden’s Inauguration Day on Jan. 20, 2021.

And there were 3.5 million Americans who were already fully vaccinated by the time Biden became president.

Joe Biden might want to do some “fact checking.”

The Washington Post’s resident “fact-checker” Glenn Kessler said, “Who’s manning the @WhiteHouse Twitter account? Delete this false tweet. Biden himself has said 8% of seniors had gotten the vaccine on the day he took office. Biden was one of them.”

CNN “fact-checker” Daniel Dale weighed in also. “‘There was no vaccine available’ is very clearly false. More than 3 million Americans were fully vaccinated and more than 18 million had at least one dose by Biden’s Inauguration Day. Biden himself was fully vaccinated. Obviously became more widely available with time, but no doubt, and they’re free to tweet ‘the vaccine wasn’t available to much of the public’ or whatever. ‘There was no vaccine available,’ the end, goes way too far given that there were nearly 19 million people with shots, wrongly suggesting the whole rollout began under Biden.”

When CNN and The Washington Post attack a Democrat, you know something has gone horribly wrong.

Later in the week, the White House “corrected” the Tweet to say the vaccine was not “widely” available when Joe Biden took office.

Joe Biden’s FDA boss claims this non-health issue is the leading cause of death in the U.S.

The Biden administration has made some truly bizarre claims.

And as the country slips further into chaos, their claims get even more surreal.

Now Joe Biden’s FDA boss is claiming this non-health issue is the leading cause of death.

One thing you can say about the radical left, when they go in on a cause, no matter how wrong they are, they go all-in.

It’s been proven completely false, and even proven that the entire thing was bought and paid for by Hillary Clinton and the Obama administration.

In other words, it’s been proven, beyond a shadow of a doubt, that it was a complete fabrication.

Yet to this day the radical socialist left and their handmaidens in the mainstream fake news media continue to act as if it is real.

Now they have a new cause: stamping out “misinformation.”

That’s right, the very people who keep promoting the misinformation of a Trump-Russia collusion, now are saying they want to stop “misinformation” on social media, and on the internet.

In fact, they have taken it to an extreme no one saw coming.

During a recent appearance on CNN, Biden’s FDA boss Dr. Robert Califf made the wild claim that the leading cause of death in the United States is online “misinformation.”

Yep, he really went there.

You actually can’t make these things up!

Califf made these outrageous remarks during an interview with CNN’s Pamela Brown. But he initially made the same statements at a health conference in Texas in April when he said online misinformation was “now our leading cause of death.”

The FDA head did at least admit there is no way to actually prove any of this before going on to mention heart disease and cancer as other leading killers in the U.S.

But then, shockingly, after just admitting there is “no way to quantify this,” Califf went right back to it and tried to once again make the charge that it is “misinformation” causing the high death rate in America.

He claimed there has been “an erosion of life expectancy,” and went on to say that Americans were living an average of 5 years shorter than people in other high-income countries.

His explanation for this was pure dystopian fantasy.

“But somehow … the reliable, truthful messages are not getting across,” he said, “and it’s being washed down by a lot of misinformation, which is leading people to make bad choices that are unfortunate for their health.”

Unfortunately, we don’t think he was talking about the misinformation and bad choices leading far too many Americans to take untested and unproven vaccines that we now know are at best ineffective, and at worst, deadly.

His approval numbers are dropping, and his legislative agenda is on ice.

And CNN said something about Biden’s economy that had Democrats hopping mad.

CNN took time out of its hysterical pro-abortion propaganda in order to talk about the issue that’s front of most Americans’ minds: the economy.

Democrats are desperate to cover abortion because they have nothing else to run on in the midterms.

CNN admitted that “a majority of US adults say [Biden’s] policies have hurt the economy, and 8 in 10 say the government isn’t doing enough to combat inflation. Only 23% rate economic conditions as even somewhat good, down from 37% in December and 54% last April. The last time public perception of the economy was this poor in CNN’s polling was November 2011, when 18% called economic conditions good. Americans also say they are more likely to hear bad news than good news about the economy, by nearly a 4-to-1 margin: 89% say they’ve heard at least some bad news, compared with 23% who’ve heard at least some good news.”

When CNN is sounding the alarm, it’s time for Democrats to panic.

Biden and the Democrats have tried everything to put a band aid on the economy, but it has not worked

They tried to blame gas prices on “Putin’s price hike,” a talking point that was dead on arrival.

Even a CNN panel said that message was not resonating.

Citing a Quinnipiac poll, host Abby Phillip said, “Americans just don’t buy that this is related to the war in Ukraine, and most of it, frankly, is not. 41% say it’s Biden’s policies, just 24% say the war in Ukraine. 24% also say the oil and gas companies are raising prices. But the White House is trying to do both, blame Putin, blame the oil and gas companies, but Americans just don’t agree.”

Democrats are attempting to thread the needle by saying that greedy oil and gas companies are not pumping oil for some reason, but are also price-gouging.

The truth is that the Biden administration is largely beholden to the environmentalist Left, and they are diametrically opposed to the oil and gas industry.

If Biden truly wanted to alleviate economic stress, he could deregulate the market as Donald Trump did and encourage more production.

But the Biden administration cannot do that without angering the progressives, who have seemingly become the most catered to constituency among the Democrats despite their relatively small numbers.