The corporate-controlled press continues to shill for Joe Biden and hammer away at Republicans.

Donald Trump gave an important gift to the country when he exposed media corruption for all to see.

And now the Fake News Media is telling one huge lie about a deadly weather event.

The state of Texas is literally weathering a once-in-a-century winter spell that knocked out power across the state.

Snow in Texas isn’t as uncommon as people might think, but the intensity during this cold snap caught many by surprise.

And as former mayor of Chicago and Obama chief of staff Rahm Emanuel once said, “You never want a crisis to go to waste.”

The Democrat Media Complex is jumping at the opportunity to slam the Republican-controlled state of Texas for the blackout.

CNN’s Brianna Keilar was just one of the corporate press talking heads who ripped Texas.

She said during a screed against Republican governor Greg Abbott, “Congresswoman Alexandria Ocasio-Cortez, one of the architects of the climate legislation, responded, ‘The infrastructure failures in Texas are quite literally what happens when you don’t pursue a Green New Deal.’”

This is a mind-numbing take.

The windmills in Texas froze over and the solar panels were covered with snow.

Being more reliant on green technology would’ve been an absolute disaster.

Not only does green tech cost more for the energy it puts out, but it also takes up more land, which environmentalists would care about in any other context.

Texas did several things wrong that contributed to the black swan weather event, but Ocasio-Cortez’s contention is insane.

It’s also comical that Democrats from California attempted to dunk on Texas when their state experiences blackouts routinely because of their nonsensical energy policies.

Democrats believe Texas is trending purple, so they’re making a big push to turn the blackout into the scandal of the decade.

In classic Democrat fashion, Beto O’Rourke is failing up, and has floated the idea of running for Governor.

Democrats refuse to let their unwanted politicians wither away.

CNN is a sinking ship taking on more water each passing minute.

The network has lost 90% of its viewership since last year.

Now one CNN host’s debut show was an absolute train wreck we couldn’t help but watch.

The former White House reporter finally hogged the spotlight enough to get his own show at CNN called Democracy in Peril.

The ridiculous show could have been called Ratings in Peril, as Acosta only drew a piddling 593,000 viewers compared to 2.6 million for Sean Hannity on Fox News.

Acosta spent the entirety of the show regurgitating the talking point that American democracy will cease to exist unless Democrats ram through their voting reforms that would nationalize elections and make permanent universal mail-in voting a practice that even Democrats have admitted is ripe for fraud.

Acosta spoke with Democrat election lawyer Marc Elias, who is known for rolling into town and challenging election results that the Democrats don’t like.

Elias showed up in the Virginia Gubernatorial race right around the time that the Democrats pulled an ugly election stunt where they dressed up Democrat operatives as tiki-torch-wielding racists all in for Republican candidate Glenn Youngkin.

The traitorous Lincoln Project took responsibility for the stunt, but many raised questions if they were actually behind it because all the activists involved were Democrats.

Acosta had on Elias and teed him up to rant about Republicans stealing future elections or some such nonsense.

Elias spouted off nonsense, claiming, “I think we are one, maybe two, elections cycles away from a real constitutional crisis because you now have one of the two major parties in this country that is no longer committed to free and fair elections, no longer committed to the peaceful transfer of power. And, you know, it’s easy for people to dismiss this as the rantings of crazy people. But the fact is Donald Trump was the President of the United States when he was talking about calling up the military. These people who we now dismiss as, you know, as off their rocker were working for the President of the United States. And they’re now working for Republican candidates around the country.”

So Elias says a “constitutional crisis” is nigh unless Democrats are allowed to change all of the rules.

That is truly absurd, especially when the voter ID laws enacted by Republican legislatures are supported by 80% of Americans.

Also, it was Biden that had Washington, D.C. under military occupation for months after his inauguration.

The Democrats are the true threat to democratic norms, which is why their projection is so calling.

Having a senile leader in charge is a major liability for Democrats.

And CNN is doing damage control after Biden slipped up in a big way.

But there’s little the network can do to sweep this bombshell threat under a rug.

The press corps seems to be helping Democrats hatch a new horrible plan.

During a recent press briefing, one reporter – who hasn’t been identified in news reports – posed the most ridiculous, partisan, leading question.

“Speaking of voting rights legislation, if this isn’t passed, do you still believe the upcoming election will be fairly conducted and its results will be legitimate?”

Biden jumped on that concept with enthusiasm that suggests it’s part of the Democrats’ playbook.

“Well, it all depends on whether or not we’re able to make the case to the American people that some of this is being set up to try to alter the outcome of the election,” Biden said. “I think if, in fact – no matter how hard they make it for minorities to vote – I think you’re going to see them willing to stand in line and defy the attempt to keep them from being able to vote. I think you’re going to see the people who they’re trying to keep from being able to show up, showing up and making the sacrifice that needs to make in order to change the law back to what it should be.”

CNN’s Erin Burnett recently tore into Biden for accusing Republicans in places like Georgia of making it difficult for minorities to vote when New York’s laws are much stricter.

But it doesn’t matter how you spin it, Biden’s rolling with something that borders on extortion – basically threatening to invalidate the 2022 elections unless Republicans cave in and accept his federal election power grab.

In fact, he doubled down on that position in a follow-up question.

“I’m not going to say it’s going to be legit,” Biden said. “It’s – the increase and the prospect of being illegitimate is in direct proportion to us not being able to get these – these reforms passed.”

While it’s tempting to blame Biden’s outrageous statements on his typical confusion, we do ourselves a disservice if we don’t recognize serious forces at play here.

While Biden bumbled around a bit, he strung entirely too many words together into a complex accusation for us to assume there isn’t some real planning at play here.

Furthermore, even bringing up the concept of “illegitimate” elections based on Republicans’ demands to make sure dead people don’t vote is part of what’s coming to look like a propaganda campaign designed to condition Americans to accept the twisted logic of an authoritarian regime.

Considering that the “woke” Left has already delivered riots, crime waves, and skyrocketing inflation – all we need is to add elections where a President ensures he and his party wins to help us sink to the level of an impoverished third-world country run by drug lords.

That’s exactly what we’ll be getting if we don’t put a stop to this mess fast.

CNN has been mired in scandal.

The termination of primetime host Chris Cuomo was only one of several.

At first, Chris Cuomo said he only helped the former New York Governor in a brotherly capacity, but further evidence exposed that as a lie.

Now Cuomo’s six-hour testimony before New York state investigators has leaked, and everyone can see just how dishonest he was.

But after they got their hands on transcripts of Cuomo’s testimony, CNN released the following statement:

“When Chris admitted to us that he had offered advice to his brother’s staff, he broke our rules and we acknowledged that publicly. But we also appreciated the unique position he was in and understood his need to put family first and job second. However, these documents point to a greater level of involvement in his brother’s efforts than we previously knew. As a result, we have suspended Chris indefinitely, pending further evaluation.”

The network fired him shortly after.

Cuomo’s video testimony is even worse than second and third-hand accounts because people get to see the duplicity up close and personal.

Cuomo went on air and told his audience, “I never made calls to the press about my brother’s situation.”

However, he told investigators the exact opposite.

He also traded text messages with a top aide for his brother and discussed if and when upcoming hit pieces would be published.

Cuomo texted about the status on a piece from #MeToo crusader Ronan Farrow: “Story not ready for tomorrow . . . [F]ellow journalist who works with Ronan a lot.”

He also texted, “I have a lead on the wedding girl,” a reference to the woman getting caressed by Andrew Cuomo in a creepy photo. 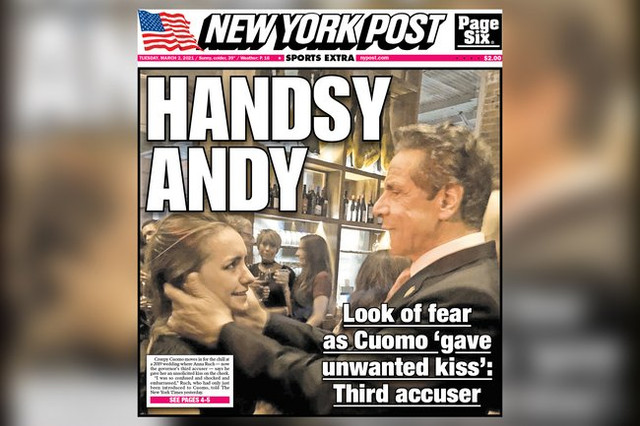 It’s going to be impossible to take Cuomo seriously as a news host again when he so flagrantly violated the trust of the people.

That said, NBC simply reassigned Brian Williams after he got caught lying about taking fire on a helicopter in Iraq.

But CNN’s ratings are in the tank and Cuomo certainly won’t be coming to the rescue.