Most of the time Big Tech and Big Media are marching lockstep in time with their Democrat band leaders.

But every once in a while, a member of the band gets so out of tune the others just have to call them out.

To say CNN has been having a bad year is putting it mildly.

Their viewership continues to drop making them less watched than the Cartoon Network.

Their legal woes and the fallout from numerous sex scandals continue to escalate.

And CNN+ the much-anticipated subscription service has been canceled after a mere five weeks after it launched with great fanfare and the “respected” Chris Wallace at its helm.

Poll after poll show that CNN has become among the least trusted news source in America, and Fox News has become the news giant CNN once was.

Now, CNN is even being attacked by its own.

No, not just the Cuomos.

He explained he witnessed an incident that took place during the 2014 Ferguson, Missouri, riots where this happened.

Dorsey bashed Stelter on Twitter after the comical CNN host shared a link from the Washington Post, which accused Fox News host Tucker Carlson of “selling doubt” to his audience.

Dorsey fired back at Stelter, “And you all are selling hope?”

The Twitter founder’s response prompted a social media firestorm, with at least one Twitter user accusing him of defending Carlson.

“Not defending a thing. Holding up a mirror,” Dorsey wrote back.

Dorsey later took aim at the network as a whole in response to a tweet from Miss Universe Iraq’s Sarah Abdali Idan, who wrote, “Even @CNN sometimes sells false news. I know this from covering Iraq events in 2019. People need to understand every media is prone to either mistakes or deliberate corruption. Do your own investigations before believing what they’re selling you.”

Her remark prompted Dorsey to tweet, “I know this from being on the streets of Ferguson during the protests and watching them try to create conflict and film it causing the protestors to chant ‘f*** CNN.'”

If CNN and its resident class clown, Brian Stelter, can get even the leftist Jack Dorsey to attack them, you know they must be bad.

It almost seems like the last desperate gasps of a drowning network struggling to do anything to stay afloat. 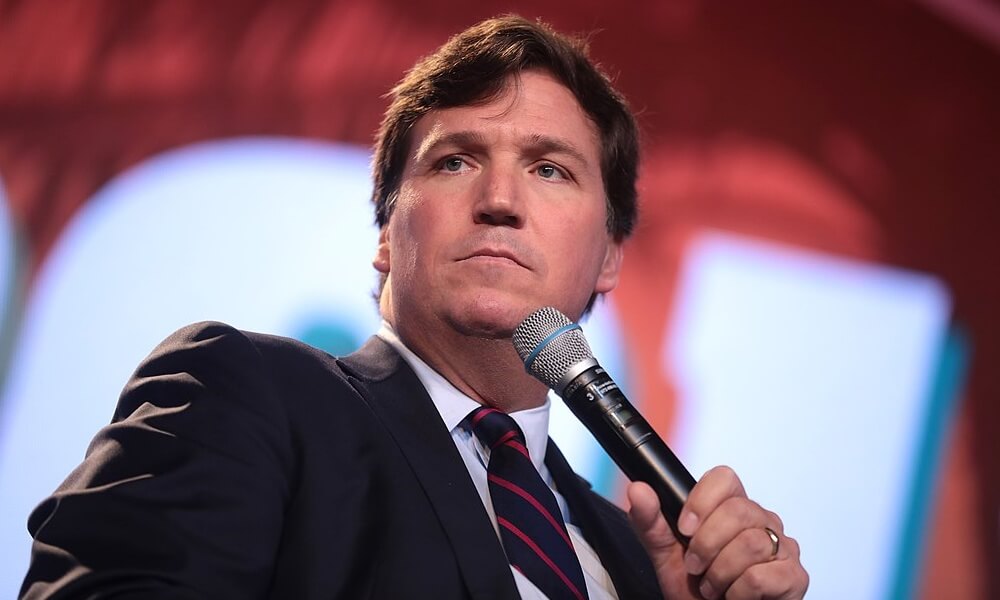 Perhaps no one is more effective than Tucker Carlson at undressing the so-called “mainstream” media.

That’s why he’s so hated by the Left.

And Tucker Carlson just torched CNN after the network ran cover for this Communist terror group.

The Communist terrorists of Antifa have waged war against police officers in several major American cities around the country.

The latest example is Atlanta, where Antifa goons rioted and committed all sorts of acts of violence after one of their illegal autonomous zones was cleared out.

For years, Democrats and their lapdog media allies have either pretended Antifa doesn’t exist, or claimed they were simply fighting fascism.

But those lies are falling apart as the carnage increases.

And Fox News’ Tucker Carlson laid out why Democrats are running interference for communist thugs.

The reason is that Antifa serves as Democrats’ shock troops, and many of the members are the college-educated sons and daughters of ruling class left-wing elitists.

“Why [are] the same people who warned you about right-wing extremists walking around the Capitol running cover for domestic terrorism in the city they’re based in?” Carlson began.

“In May of 2020, Antifa actually got inside CNN Center,” he explained. “They smashed through the windows and went right in. So if you’re CNN, you’d say, ‘Well, look, we’re going to have to put Antifa on the do not promote list. We just can’t run cover for the people who smash the windows of our world headquarters.’ But they are. They’re doing it anyway. Why are they doing that?”

“They’re defending the people who benefit from Antifa,” he concluded. “And that’s the Democratic Party.”

Antifa is a Communist terrorist organization that doesn’t actually like Democrats, but with Republicans as their common enemy, they’ve formed a grotesque, symbiotic relationship.

“And in case you doubt the connection, consider Representative Katherine Clarke of Massachusetts, she/her,” Carlson noted. “Katherine Clarke is one of the senior Democrats in the House of Representatives. In fact, she’s the Minority Whip. She’s the one who was so worried about climate change. Remember, she told you that her kids were having nightmares about it? Didn’t stop her from buying a $1,000,000 oceanfront home, but whatever.”

As it turns out, Rep. Clarke’s son, who was so traumatized by climate change that he grew up to be an Antifa thug, recently got arrested in Boston.

“So Katherine Clarke’s own son, Jared Dowell, was riding along with Antifa in Boston on Saturday night,” Carlson added. “He was vandalizing a monument on Boston Common when police tried to arrest him. Jared Dowell and other protesters then assaulted the police, causing the specific officer to bleed from the nose and mouth. Oh, that was her son.”

For the record, Clarke’s son now identifies as a transgender woman.

This is what left-wing radicals are doing to kids in government schools – they’re indoctrinating them with woke left-wing gender ideology, and glamorizing left-wing “protesters.”

They’re terrorists, and they should be investigated as such.

It’s shameful that CNN and other major outlets run cover for them.

CNN created a monster when it turned Brian Stelter loose on the world.

And fired CNN hack Brian Stelter made a total fool of himself with this one anti-free speech move.

Brian Stelter is such a mess, even the leftists over at CNN can’t stand him.

Stelter is a rare example of a left-wing hack who was so awful, even CNN sent him packing.

But rather than being forced to rethink his life choices, the crooked self-proclaimed “journalist” was immediately embraced by left-wing elitists with a cushy Harvard fellowship.

Now, he’s completely selling out in order to prop up some of the most devious leftists on the planet.

Twitter lit up after Stelter hosted a panel in Davos, Switzerland at the World Economic Forum (WEF) on “disinformation” and “hate speech.”

The left-wing global elites involved in the WEF have put considerable effort into scheming to get the masses to help them eliminate free speech worldwide.

At its heart, the strategy is to scare people into accepting their authoritarian control.

Stelter willingly played his part, hosting a panel on the “Clear & Present Danger of Disinformation.”

During the discussion, Stelter not only provided the expected leading questions, but didn’t even bat an eye when European Commission VP Věra Jourová predicted that free speech should — and will — soon be outlawed in the United States.

“Illegal hate speech, which you will have soon also in the U.S., I think that we have a strong reason why we have this in the criminal law,” Jourová asserted.

Twitter lit up with people immediately outraged by the obvious danger of left-wing radicals, like Stelter and his puppeteers, running the world.

“Brian Stelter just sitting there instead of challenging this petty fascist is a big reason why he’s unemployed,” The Spectator World contributing editor Stephen Miller noted.

Meanwhile, conservative podcast host Mike Crispi pointed out that the WEF’s choice of moderator is telling.

“Brian Stelter hosting a panel about disinformation at the WEF tells you everything you need to know about the WEF,” Crispi wrote.

Other Twitter users pointed out that Stelter’s involvement should be satire, rather than something we’re all expected to take seriously.

“Thought this was an onion article,” Kevin Thobias wrote. “I was wrong.”

“If Oxymoron was a person…” Jack Lombardi II noted.

“Whoever inflated his head this morning gave it a few pumps too many,” Hollaria Briden, Esq. added.

“Brian Stelter is a longtime supporter of Disinformation as that was his job at CNN,” Butch Miller pointed out. “He is quite good at it so I guess that makes him an expert.”

Brian Stelter was fired from CNN because he was so awful, potential viewers refused to watch his pitiful excuse for a “news” program.

The WEF has famously claimed that once its plans are implemented worldwide, “you will own nothing, and you will be happy.”

Apparently, they’ve picked out the so-called “journalist” they plan to use to tell us exactly how “happy” we all are.

But the corporate-controlled media can’t let too many Americans know that.

And CNN’s pants are on fire after this left-wing hack lied to protect Klaus Schwab’s World Economic Forum.

Klaus Schwab is the founder of the World Economic Forum and an all-around creepy guy, who claims he wants to “reinforce cooperation between the government and business sectors, creating the conditions for a strong and durable recovery.”

Which would be great if his plans to “reinforce cooperation” weren’t code for ensuring a small group of elites are able to grasp complete control over every single person on Earth, leaving personal freedom, autonomy, and individual sovereignty in the dust of their so-called “progress.”

Now, with hundreds of billionaires and 52 heads of states descending on Davos, Switzerland to plot how they’ll run the world, conservatives are sounding the alarm.

Meanwhile, CNN is stepping up to run interference for Schwab with a hit piece attempting to paint Republicans as complete nut jobs.

The piece went on to complain that there are “radical ideas” that are going mainstream because they’ve “been popularized by some of the most influential personalities in right-wing media.”

Darcy took a swing at Blaze Media CEO Glenn Beck – who actually gave the CNN hack his start in media when he pretended to be a legitimate journalist prior to joining Business Insider – for writing a “conspiratorial book called ‘The Great Reset’ playing off the WEF’s 2020 Covid theme.”

He even complained that Beck “interviewed a guest who claimed, unchallenged, that the gathered world leaders ‘want you to eat insects rather than meat.'”

Conveniently, Darcy omitted the fact that Klaus Schwab actually published his schemes himself in “COVID-19: THE GREAT RESET” and “THE GREAT NARRATIVE Book 2 of 2: The Great Reset.”

And the CNN writer certainly didn’t bother mentioning that WEF speaker Bill Gates’ foundation literally invested $100,000 into a startup called “All Things Bugs, LLC” with the goal of developing “a method for the efficient production of nutritionally dense food using insect species.”

Left-wing elitists have made it perfectly clear they have detailed plans for how they want working class Americans to live their lives.

And eating insects instead of meat is indeed on the table.