Left-wing critics are always looking for a way to attack Fox News.

And Fox News just made this surprising career decision about one host who refused to get the vaccine.

Even though they do not work as initially promised in preventing transmission of the virus, virtually every corporate media outlet continues to shill for the COVID vaccines.

However, Fox News Channel contributor, Lisa Boothe, is one of the outspoken critics of the COVID vaccine.

Boothe even lost a chance to fill the conservative slot on ABC’s The View after she refused to get the vaccine, which is required for anyone who works in New York City.

On Monday, Boothe tweeted that she was now part of the “natural immunity club,” implying that she contracted and recovered from coronavirus.

Add me to the natural immunity club. The initiation sucked, but the worst is behind me. 🙌

Boothe then tweeted that the omicron variant spreading wildly across highly-vaccinated areas of the country undercuts the basis for vaccine mandates and passport systems.

What is the point of mandating a vaccine that doesn’t stop the spread of COVID?

After Fox announced that Boothe would serve as a fill-in host for Laura Ingraham while she was on vacation, Boothe’s Tweets debunking the Left’s case for mandatory vaccination enraged many in the media.

Democrats and members of the corporate-controlled media claim that anyone who points out the fact that the vaccines wane in efficacy and do not stop the spread of the virus is dabbling in “misinformation” and should be banned from speaking on social media and exiled from cable news.

Despite her strong criticisms of vaccine mandates and refusal to “get the jab,” Fox putting Boothe back on the air was a welcome sign that the network would not back down to cancel culture on this issue.

The Democrats continue to escalate their attacks on Tucker Carlson.

He’s the most popular host on cable news, so the Left have to take him out.

Now an unhinged former Fox News reporter wants to do something insane to Carlson.

The horrific Buffalo mass shooting has given Democrats an excuse to go after Fox News host Tucker Carlson.

The rationale is that Carlson’s questioning of the Democrats’ immigration policy is somehow connected to a deranged white supremacist shooter who targeted black Americans, not migrants.

It’s a despicable tactic by the Left, but they have no shame.

Cameron, a liberal who dispels the myth that Fox News only has staunch conservatives at the network, said during an MSNBC interview, “We got to watch out because the Republicans have become the purveyors of misinformation…the president acknowledged that it’s time to actually start doing things and maybe taking some names and putting people in jail.”

The Democrats believe that in order to save democracy, they must destroy it by violating the First Amendment and throwing journalists in jail.

Cameron doubled down on his fascism.

In an interview with CNN, Cameron argued, “There’s a point when it becomes difficult for an executive to put up with the help…In this particular case, Tucker has been screaming fire in a crowded movie house for years, and that cliche really comes to the matter of what is free speech, and the fact of the matter is, if you disturb the peace by starting a riot in a movie theater, cops are going to arrest you and you might end up in jail or you might end up in something worse.”

It’s unclear what the “worse” Cameron is alluding to; perhaps he’s moved straight to summary executions.

Cameron seems as though he has an ax to grind with Fox News after he left the network.

He blasted Fox News on his way out the door, and a company spokesman said in a statement, “Carl Cameron left the network because he was no longer able to show up to work each day – he has a very short memory for our endless compassion, patience and graciousness in dealing with his multitude of personal struggles.”

Whatever Cameron’s personal struggles may be, he clearly is unable to see things clearly if he’s calling for the arrest of journalists for having differing opinions.

The mask has slipped.

Everyone can see that the Democrats deep down are a band of authoritarians. 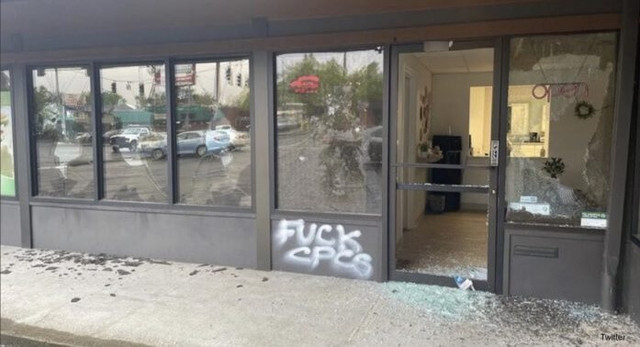